John Green’s best selling novel, The Fault in Our Stars, has been given the big screen treatment by Stuck in Love director 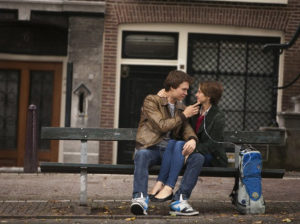 Josh Boone. A teen love story about two young cancer sufferers, on the face of it, screams out sentimentality. However Green’s story is far from the cheesy, clichéd fluff we have come to know, and instead sticks two fingers up to cancer in a quirky, witty, but yet still highly emotive fashion.

Hazel Grace Lancaster (Shailene Woodley) and Augustus (Gus) Waters’ (Ansel Elgort) relationship is far from conventional. They meet in a cancer support group that neither want to be at. Hazel, suffering from terminal cancer – having to wheel around an oxygen tank wherever she goes – and Gus, in remission – with a prosthetic leg as a result of his illness – quickly connect. Their lives uncertain, and with time possibly short, the pair of teenage lovebirds  head to the Netherlands with Hazel’s mum, Fannie (Laura Dern), to track down elusive author Peter Van Houten (William Dafoe) on what is supposed to be a trip of a lifetime.

Adapting such a widely popular book and pleasing everyone is always an impossible task. There are always moments left out from its written source that fans are going to be disappointed by, and The Fault in Our Stars is no different. Waters’ backstory is certainly not as developed in the film as it is in the novel, leaving out key snippets that may have given the movie a little more depth. Boone’s attempt, therefore, is certainly not faultless (pun most certainly intended), but what  he has done so well is capture the spirit of Green’s novel so effortlessly.

Yes it is sad, yes it is still a little sentimental – it can not help but be – and yes, you may well cry. However, like the characters in the book, this story is not defined by cancer. You have two great leading characters who translate so well to film: Gus the charismatic, loveable charmer, and Hazel the understated, pretty girl with a tough streak. Woodley is excellent, but it is Elgort who impresses most with a character whose confident nature could, falsely, be portrayed as arrogance, but the Carrie star plays it to a tee.

Occasionally Boone’s film slips from its lofty heights of quirky excellence into the realms of emotional pandering, but generally the balance between the sentimental, funny and tear-inducing sadness is finely struck. If your eyes are not watering by the end of this cry-fest, well, you might well be a robot. Lovable, engaging characters and a story that will warm, melt and eventually crush your little hearts, The Fault in Our Stars in this years must see weepie. Take plenty of tissues.

Copyright © 2022 Create a free website or blog at WordPress.com.