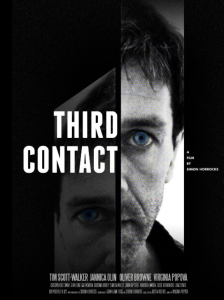 Suicide, is a thought provoking piece of cinema from the newbie director, with its biggest fault being that it appears to try too hard.

Filmed on a budget of £4,000, it follows the story of Dr David Wright (Tim Scott-Walker), haunted by his unhappy past and plagued by an uncertain future, including the apparent suicide of one of his patients, it becomes a tale of both life and death. When the sister of his deceased patient, Erika Maurer (Jannica Olin), comes looking for answers over her brother’s mysterious death, together they set out to find the truth – opening doors to a world they could never have imagined.

Third Contact, to begin with, felt much like a director learning on the job, something Horrocks himself admitted to be doing. Opening sequences felt overcooked, not in terms of the acting, nor the script itself, but by over-zealous transitions and an over-reliance on close-up shots that felt like an unnecessary attempt to add an aura of mysteriousness to an already darkly intriguing piece of cinema. The hand-held approach to filming, which gave off a shaky, yet supposedly first hand-account of the action, was especially over-used – becoming an annoyance rather than a well executed plan of action – making certain scenes particularly difficult to watch, and not for the reasons the director would have hoped. The real shame here being, however, is that this overshadowed the film, and took away from Horrocks’ strongest asset: the story.

It is a dark tale clouded in tragedy, of which the debutant, to our relief, does not overplay through its writing, keeping the dialogue sharp and surprisingly poetic. Scott-Walker’s character, David Wright, is well constructed, if not somewhat elusive, whilst Erika, performed excellently by Olin, is unfortunately underused. Filmed predominantly in black and white, this technique successfully added to the films mystique, with colour only introduced in flash-back sequences – a nice touch, and one that fitted well with both the story, and reflected Walker’s mindset: a once bright past, and a dark, uncertain future.

Third Contact is a gutsy first attempt at filmmaking. A well developed, if not slightly confusing storyline, that will leave audiences pondering for hours after its conclusion as to its significance, Horrocks has produced a film that certainly keeps the mind ticking over. It is a shame, however, that he has tried to do to much, to often, taking away from a promising script, and making the film look overworked, and, even more difficult to watch.

Copyright © 2021 Create a free website or blog at WordPress.com.