Everyone loves a good musical film, right? What better time to have a good ol’ sing and dance than at Christmas. ‘Tis the season to be jolly, after all. With the uplifting nature of the musical, there is no surprise that they are a favourite amongst the festive film watchers out there.

The ever-delightful Julie Andrews reconnects two disjointed families in the popular musicals The Sound of Music and Mary Poppins, whilst The Lion King has the ever emotional ending of Simba becoming king. Even in The Muppet Christmas Carol you have Ebenezer Scrooge making peace with the world. Musicals just have an ability to make you feel better.

Whether its content is festive related does not matter; musicals are just the perfect recipe for a relaxing, family oriented night in on a cold winter’s evening.

So, what are the best musicals to watch at Christmas? There is only one place to start…

The Oscar winning actress is undoubtedly the queen of big screen musicals. Most famously known for her fabulous performances in The Sound of Music and Mary Poppins, Andrews has gone on to perform in numerous other well received film musicals.

The Sound of Music and Mary Poppins however are two of the most popular musicals of all time, and appear regularly on our television screens at Xmas – and rightly so!

The theme of both films revolves around the issue of family. The two films see a disoriented family unit saved by the charming Andrews in her respective roles as Mary Poppins and Maria in The Sound of Music.

Enchanting musical numbers such as The Sound of Music, My Favourite Things and Supercalifragilisticexpialidocious have charmed the pants off of millions of impressed viewers over the years, leading to the two films being regarded as rightful Christmas time classics.

The Lion King is one of Disney’s greatest ever creations. It is not just a cracking film full of great characters and an emotional storyline, but it is also full of amazing songs that have captured the hearts of so many people around the world.

Although the film starts off on a rather sad front, its joyous ending (as well as numerous musical performances) means that The Lion King is another must watch at the most wonderful time of the year. 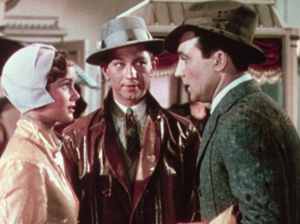 Gene Kelly thrills as Don Lockwood as a silent film production company find it hard to make the transition into the new world of ‘talkies’.

Laughter, romance and music… What more can you want in a Christmas time movie? Songs such as Singin’ in the Rain and Make ‘em Laugh have lasted the strength of time; still as popular now in the musical world as they were back in 1952.

Get your umbrella up and let Kelly, O’Connor, Reynolds and team transport you into their magical world. Oh what a glorious feeling…

This one’s for the kids.

Cheesy, predictable and over-the-top, but heck, it is mightily infectious. It has all the ingredients of an uplifting, easy going musical film that is a perfect watch for Christmas. Musical performances like We’re All in This Together and What I’ve Been Looking For will leave you with a warm fuzzy feeling inside.

There is no way we can compile a list of musicals to watch during the festive holidays without mentioning the six time Oscar winning Oliver!

Emotional, enchanting and mixed together with a superb soundtrack; Oliver! has it all when it comes to great Crimbo viewing. Food, glorious food…

Does this one need an explanation? Led by Kermit the Frog, join Ebenezer Scrooge (Michael Caine) as he embarks on learning the true meaning of Christmas (and life).

The involvement of the Muppets and the fabulous Michael Caine breathes new life into the classic seasonal tale. Its funny nature and enjoyable songs make it a more family oriented spectacle than the original.